WHO IS CHARLES GREEN?

Constructed as a residence for Mr. Charles Green, who had come to Savannah from England in 1833, the house was designed by a New York architect, Mr. John S. Norris. Norris was the preeminent architect in pre-Civil War Savannah; he was also responsible for designing the Custom House, Massie School, and several other fine homes. Mr. Green arrived in Georgia with little means, but made his fortunate as a cotton merchant and ship owner. He amassed enough money by the early 1850s to build his Gothic Revival urban villa, considered one of the most elaborate homes in Savannah and one of the most expensive in America, at the time of its construction.

Hoping to protect his home and his cotton from destruction when Union General William T. Sherman’s army drew near in December of 1864, Mr. Green rode out to meet the Union forces and invited the Civil War commander to use his home while in Savannah.

In 1892, the home was purchased from the Green family by Judge Peter W. Meldrim, distinguished Georgia jurist and President of the American Bar Association (1912-1913).

St. John’s Episcopal Church acquired the house from the Meldrim heirs in 1943 for use as a parish house and rectory. The house was declared a National Historic Landmark in 1976.

View Photos of the Green-Meldrim House 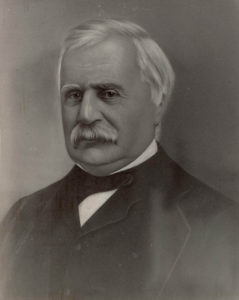