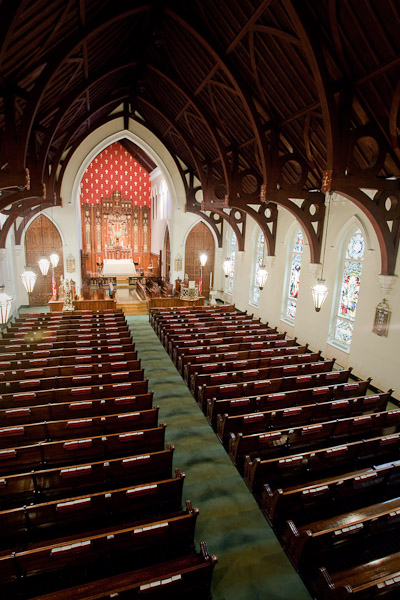 St. John’s Church was founded in 1841, when “the Wardens and Vestry of St. John’s Church, in Savannah” were incorporated by act of the Georgia State Legislature (November 26). Its first rector was the first bishop of Georgia, the Right Reverend Stephen Elliott.

Designed in the Gothic Revival style by Calvin Otis, an architect from Buffalo, New York, the present church building was dedicated to the service of Almighty God on May 7th, 1853. The former Parish House was added to the west end of the church building in 1881.  It now houses a chapel and sacristy on the ground floor, offices on the second floor, and choir rooms on the third.  While General Sherman and his officers were occupying the Charles Green House (now Green-Meldrim) in 1864, Sherman’s chaplain conducted Christmas services in St. John’s Church.

The present Parish House (also known as the Green-Meldrim house) was designed and built by John Norris for English cotton merchant Charles Green in the early 1850’s. It later passed to the family of Judge Peter Meldrim, and was purchased by St. John’s in 1943. The former domestic offices were converted for use as the Rectory.

A Christian education and fellowship building, erected in 1953, was extensively renovated in 2004 with the addition of a third story, and renamed Cranmer Hall. In 1960 a portion of West Macon Street was purchased from the city and a Gothic revival arcade built across it, linking the church to the Parish House, and enclosing a garden mall.